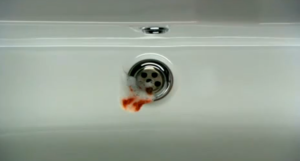 Following my last ‘Noose’ on the KFC bucket run campaign, I promised I would ‘Smooch’ at least 10 ideas before trashing another one.

But this ‘thing’ made me change my mind.

it’s not a conversation.

it’s not an idea

it’s not a connection

I glance at this ‘thing’ and i can hear the client mumbling somewhere in a cold, grey, corporate conference room:

‘let’s shock people….let’s show them blood…they will get scared and start using our brand….it worked in Poland!’

I relook at it and i can see the agency guys sit silent, defeated, losing interest, after many weeks of struggle.

Congratulations Brand team….you just won your argument and flashed your ‘insight’ right in front of our eyes…

While you think this is a result generating campaign, the reality may be a bit different.

It is a disgusting ‘ad’ that even ‘blood spitting people’ may not appreciate.

And while the ‘insight’ is spot on, (and I’m sure you spent a fair amount of money on ‘research’), you missed a very important point:

Communication is not about flashing your insight in its raw form!

It’s more about taking it to another level, a level where you can have a proper connection with your audience.

A level where you can let your audience identify and connect in a subtle way. Let them see the ‘revelation’

And trust me…a visual mix of saliva and blood will not do it.

It will just result in a sudden face-turn, and people wouldn’t glance at it ever again.

So you have a product that certainly works…

and I understand you want to target a specific audience.

Have you considered doing it in a way that would not make them feel embarrassed to ask for your brand?

..and without polluting Sheikh Zayed Road?

There’s hardly a time when you see something pleasing to the eyes in the newspaper when it comes to advertising in the region. But the idea, colors and overall art direction of the second anniversary campaign for Bloomingdales is a definitely a “Smooch”.

Not just the fact that it talks about Bloomingdale’s second anniversary (being the 2 year old brand in Dubai) but it also sends a relevant message to the lovers out there for Valentines. Very well done!

However, if the campaign had more executions/stories it would have been even better. Let’s see what they have to say on being 3 years old :-)